Learn more about the benefits of using flightcharter.com.au
Keep up to date with latest news and events
Get inspired to visit amazing and unique places

How to Organise a Medical Repatriation

Medical repatriation is the movement of a patient by medical plane or medical helicopter from their current location to their home city or country.

This is usually carried out after an illness or accident away from home and when the patient needs to be returned home for further treatment or palliative care.

The most basic type of medical repatriation would be on a commercial airline when the patient is fit to fly in a standard seat accompanied by a Nurse or Doctor, who could administer treatment throughout the flight if necessary.

Of course, the passenger has the option not to declare their illness but this would be risky in case of an onboard emergency and if the passenger does not look as though they are fit to fly they may be refused boarding by the airline.

It is also at the discretion of the airline whether to allow a passenger to board even if they possess a ‘fit to fly’ certificate.

If you are organizing this type of flight, then the first place to start is with a ‘fit to fly’ certificate from the passengers’ Doctor, this will state the conditions in which they are allowed to fly. Eg; they must be accompanied by a Doctor and have oxygen on board the plane. You then need to find a commercial airline which will accept these conditions and book a flight within 7 days as the ‘fit to fly’ certificate only has a life span of 7 days.

If the passenger is not able to sit in an upright seat position for take-off and landing, then they will be considered as a stretcher patient and the process becomes a lot more complicated. Not all commercial airlines will take stretcher patients, so this is the first hurdle to be overcome.

When a medical repatriation involves a stretcher on a commercial airline then you need to purchase 9 – 12 economy seats on that flight. 9 seats will usually be laid flat to make room for the stretcher and 2 – 3 more will be required for the accompanying medical staff. With a stretcher patient, a Doctor and two nurses are usually required to accompany. 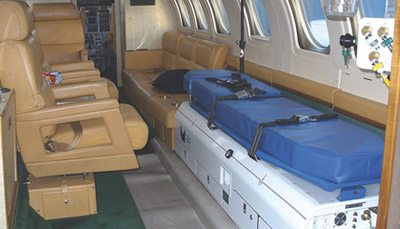 If a commercial airline flight is not a viable option, then you have the choice of chartering a private air ambulance, medical plane or medical helicopter with sufficient medical equipment on board to undertake the task.

There are advantages and disadvantages to carrying out a medical repatriation with a private plane.

Contact us today to discuss your medical repatriation needs and get a charter flight quote. Our experienced team of experts has access to all medical planes and medical helicopters across Australia.